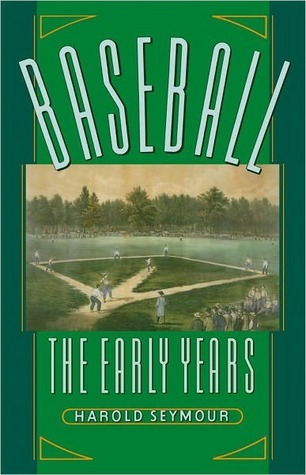 Now available in paperback, Harold Seymours The Early Years and The Golden Age together recount the true story of how baseball came into being and how it developed into a highly organized business and social institution.The first volume, The Early Years, traces the growth of baseball from the time of the first recorded ball game at Valley Forge during the revolution until the formation of the two present-day major leagues in 1903. By investigating previously unknown sources, Seymour uncovers the real story of how baseball evolved from a gentlemans amateur sport of well-bred play followed by well-laden banquet tables into a professional sport where big leagues operate under their own laws.

Offering countless anecdotes and a wealth of new information, Seymour explodes many cherished myths, including the one which claims that Abner Doubleday invented baseball in 1839. He describes the influence of baseball on American business, manners, morals, social institutions, and even show business, as well as depicting the types of men who became the first professional ball players, club owners, and managers, including Spalding, McGraw, Comiskey, and Connie Mack.The second volume, The Golden Age, explores the glorious era when the game truly captured the American imagination, with such legendary figures as Babe Ruth and Ty Cobb in the spotlight.

Beginning with the formation of the two major leagues in 1903, when baseball officially entered its golden age of popularity, Seymour examines the changes in the organization of professional baseballfrom an unwieldy three-man commission to the strong one-man rule of Judge Kenesaw Mountain Landis.

He depicts how the play on the field shifted from the low-scoring, pitcher-dominated game of the dead ball era before World War I to the higher scoring of the 1920s lively ball era, with emphasis on home runs, best exemplified by the exploits of Babe Ruth.Taken together, these volumes offer a serious and dramatic study of the game both on the field and in the business offices.